This is an overview of the best tools and the best resources for building desktop applications in Python.

First things first. You can build great desktop applications in Python, and some are widely used (like Dropbox). But you’ll have to find your own way much more than you would using Microsoft’s or Apple’s SDKs. The upside is that, with a bit of legwork to package it appropriately, it’s quite feasible to write a Python application that works on all the major platforms.

The first thing you’ll need to choose is a GUI toolkit. 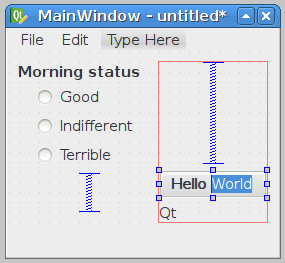 For attractive, tablet-style interfaces, Kivy is the right choice. It’s a fairly young but promising system. If you want to bring your application to tablets and smartphones, then Kivy is the only option that I’m aware of. More info

A couple of alternatives I wouldn’t recommend unless you have a reason to prefer them: GTK is popular on Linux, but it looks ugly on other platforms. The older pygtk bindings have excellent documentation; the newer PyGObject system, which supports recent versions of GTK and Python, doesn’t (though it’s getting better). wx seems to have a good community, but development is slow, and new projects that could have used it now mostly seem to pick Qt.

This is probably the roughest part of making an application in Python. You can easily distribute tools for developers as Python packages to be installed using pip, but end users don’t generally have Python and pip already set up. Python packages also can’t depend on something like Qt. There are a number of ways to package your application and its dependencies:

Although some of the freeze tools can build Linux binaries, the preferred way to distribute software is to make a package containing just your application, which has dependencies on Python and the libraries your application uses. So your package doesn’t contain everything it needs, but it tells the package manager what other pieces it needs installed.

Unfortunately, the procedures for preparing these are pretty complex, and Linux distributions still don’t have a common package format. The main ones are deb packages, used by Debian, Ubuntu and Mint, and rpm packages, used by Fedora and Red Hat. I don’t know of a good, simple guide to packaging Python applications for either – if you find one or write one, let me know.

You can get users to download and install your package, but if you want it to receive updates through the package manager, you’ll need to host it in a repository. Submitting your package to the distribution’s main repositories makes it easiest for users to install, but it has to meet the distro’s quality standards, and you generally can’t push new feature releases to people except when they upgrade the whole distribution. Some distributions offer hosting for personal repos: Ubuntu’s PPAs, or Fedora’s Fedorapeople repositories. You can also set up a repository on your own server.

If you don’t want to think about all that, just make a tarball of your application, and explain to Linux users next to the download what it requires.